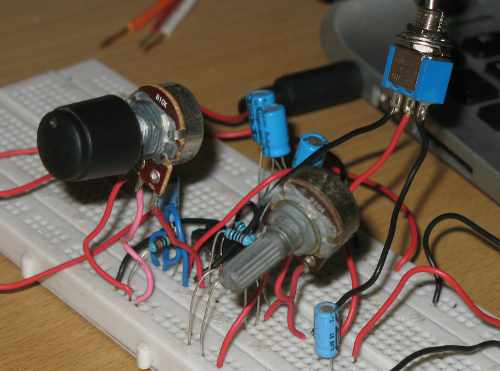 While almost every audio equipments  pay whatever it cost to minimize distortion, this kind of device does the opposite: distortion effect for electric guitar. Many methods have been implemented in producing a distorted signal from electric guitar pick-up, such as over-driven vacuum tube, solid-state (transistor), or diode clipper. The simplest form is passive diode clipper, which is implemented as the core of the distorting mechanism in the presented circuit. Figure 1 shows the assembled circuit (on the breadboard), and Figure 2 shows the schematic diagram.

The Electronic Circuit and The Schematic Diagram