To get various characteristic of an auto wah/quack effect, we need a flexible control of  the envelope detection characteristic. Some playing styles need slow attack but fast decay,  but some others don’t. Employing the envelope detector circuit presented in our previous article [Ref 1], but with some modification to make it single supply operation. Here we present the improvement of […] 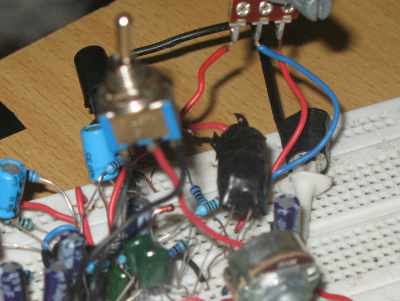 Introduction to Automatic Wah/Quack Effect Automatic wah/quack effect gives a similar effect with the manual version (reference [1]), but without the need of any pedal to manually control the frequency/tonal sweep. This automation is made possible by detecting the envelope signal of the instruments audio signal, and use it to control the filter to produce center frequency  sweep, producing audio […]

A type of guitar effect pedal that produce “wah”- or “quack”-like sound, which is similar to the crying sound of  a baby is called  wah-wah pedal, or just  wah pedal. The effect is produced by filtering the musical instrument through a band-pass filter, which the center of its peak frequency is swept from low to high, mimicking  audio tonal transition […]