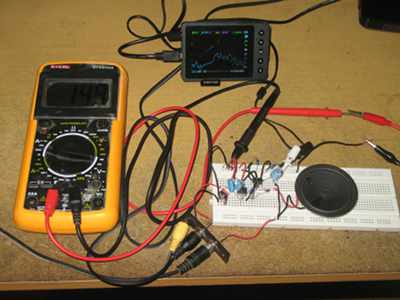 Sometimes we need small power amplifier circuit while we have unused op-amp section in one of our applied chip. Instead of adding more IC (such as LM386 or similar devices), adding  two small transistor and several passive components can be cheaper solution if we can employ the unused op-amp section. Using two small transistors (2N3904 and 2N3906), we can build small power amplifier which deliver several hundreds milliwats. The basic circuit is a totem pole transistor pair with small biasing circuit configuration to give small leakage idle-current. Let’s see the schematic diagram of the circuit in the Figure 2. TR1 transistor will be biased by base-emitter voltage, and TR2 by emitter-base voltage, and this series configuration make both transistor are biased by base-to-base voltage. When this base-to-base voltage is lower than two base-emitter forward bias voltages then both transistors will be turned off.

Let’s imagine the op-amp is omitted, then the base-to-base voltage is the voltage between R4 and R5 which is dropped by two diodes D1-D2. This voltage is slightly higher than base-to-base bias requirement to produce small leakage current when there is no signal. The op-amp output is connected to the center of diode-resistor biasing circuitry, and this signal manipulate the biasing point. At idle condition, when there is no signal in the input, the output should be bet at Vcc/2. When the signal goes positive, the op-amp output will drive the biasing point to positive side the lower transistor will be switched off and the upper transistor will be driven to give correct voltage at the feedback point pin 3 (the inverting input). The feedback mechanism will set the proper bias current to maintain the voltage level at inverting input (pin 3) to be same with the level at the non-inverting input (pin 2).

Almost any type of op-amp capable of delivering 1-5 mA current can be used for this circuit. Most of any small transistors with maximum collector current handling around 100-200 mA can be used.

The Amplifier in Action

See how this small audio power amplifier circuit works when powered and fed with music signal in our Youtube channel below: