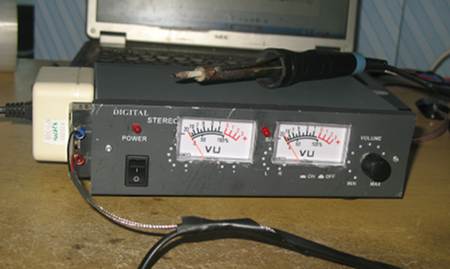 With temperature control, we can take some benefits in soldering: lower cost for electric power, safer operation of soldering critical components from excessive heat, and longer life for the soldering tip. We can save the electricity power consumption up to 50% of the uncontrolled one. A high quality soldering tip, which can be expensive enough, often made from special alloy to make it more adhesive to the soldering tin. This expensive soldering tip often has lower melting point and can be easily eroded if get frequently over heated. Here we present the electronic circuit design for controlling the temperature of a soldering iron. Using analog thermocouple, operational amplifier integrated circuit (IC), and some discrete components, we can easily build a temperature controller which is simple, robust, and cheap.

How The Temperature Controller Works

The circuit is designed using K-type thermocouple as the sensor and LM324 op-amp as the controller circuitry. The sensor is capable of measuring temperature up-to 400°C, and it should be enough for soldering application. Normal soldering should be set around 300-400°C. The controller circuitry is composed by a sensor amplifier, reference circuit, comparator, and relay circuit. The monitoring of both set point and the actual temperature is done using an analog VU meter. See the schematic diagram of the circuit in the Figure 2.