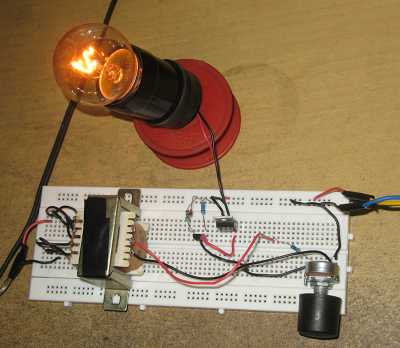 Using some active and passive components, we can build a simple audio-controlled disco light controller circuit.  A standard audio power amplifier output, which usually drive loudspeaker, can used to drive this disco light circuit. With this circuit we don’t need light jockey anymore, because the flashing of the light will be directly controlled by the music signal itself.  The schematic diagram of the circuit is shown in the Figure 2.

The third part is the buffering rectifier TR1, which provide more stable drives for the final driver SCR1. This circuit is powered by series resistor R3, which is limited to 9,1V by DZ1. This resistor and diode doesn’t filter the  ripple of the half-wave rectified voltage, it act just like a limiter that limits the voltage at 9,1V, it is fine since the SCR will keep active until the  gate voltage down to zero, regardless of the gate voltage stability.

The last part, is the final drive, the SCR itself. It provides the switching function of the disco lamp power. The  type of the SCR is not critical, as long as you choose the right voltage and amperage rating then it will be okay. Just search the datasheet of the locally available SCR types to make sure it fits your need.

The video of this working circuit can be seen at our Youtube channel below, make sure you know the safety precaution before making up this project at home, do it at your own risk!